The History of Carlsbad, CA

The Village by the Sea

Carlsbad, California, coined ‘The Village By The Sea’, is a coastal city in northern San Diego County. Nestled along the Pacific Coast Highway, this charming town provides an old-world or small-town feel, while being in reach of two of Southern California’s largest cities — San Diego and Los Angeles. 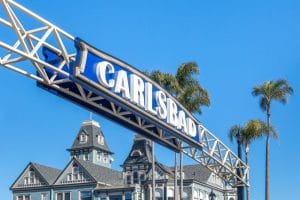 The earliest residents and settlers of Carlsbad were the Luiseño Indians, who thrived off of the land by using a number of natural resources for food and clothing. The Luiseño people were here at the time of the first contacts with the Spanish in the 16th century.

As a part of the expansion of the Spanish Empire into the most northern and western parts of North America, the New Spanish province of Alta California was created.

In 1821, Mexico achieved independence from Spain, securing Alta California along with it. However, it wasn’t until after the passage of the Mexican secularization act of 1833 that the land was divided. During this time, the southern section of Carlsbad was granted as Rancho Agua Hedionda.

From Karlsbad to Carlsbad

In 1883, a man by the name of Captain John A. Frazier dug a well near the coast in Carlsbad. He was delighted to find fresh-water, rich with minerals, and began offering it at the local train station. The train station was later remanded Frazier’s Station.

After testing a second fresh-water well in the area, many of the chemicals found were similar to those used in some of the most renowned spas around the world. Because of this, the town was named after the famous spa in the Bohemian town of Karlsbad.

Carlsbad Since the 1900s

Carlsbad was officially incorporated in 1952 to avoid annexation by its northern neighbor, Oceanside. Since then, The Village By The Sea has flourished into an affluent city with a population of over 112,000 people.

What is the climate like in Carlsbad?
What is Carlsbad's top attraction?
Where is Captain John A. Frazier's well?
What is the name of the restaurant with the best view in Carlsbad?

Carlsbad has a semi-arid Mediterranean climate. These conditions mean residents experience an average of 263 sunny days per year. In the winter, the weather is milder and sometimes accompanied by periodic rains.

What is Carlsbad's top attraction?

Where is Captain John A. Frazier's well?

The site of Captain Frazier’s well can be found at Alt Karlsbad, a replica of a German Hanseatic house, located on Carlsbad Boulevard.

What is the name of the restaurant with the best view in Carlsbad?

While you can almost guarantee that all of Carlsbad’s ocean-front restaurants will have spectacular views, we recommend Chandler’s Restaurant & Lounge.

Located at Cape Rey Carlsbad Resort, Chandler’s Restaurant & Lounge serves California coastal cuisine. No matter what time of the day you go, you’ll enjoy an uninhibited view of the beach through their glass-walled patio.